Why aren't my folders or uploaded files working?

When creating folders and uploading files to UVACollab, folder and file names that contain special characters can affect site participants' ability to download or access the files correctly.

Issues can also arise from uploading files with very long names in excess of 250 characters, or from saving files inside many stacked folders so that the resulting file location is greater than 250 characters.

This article includes the following:

Special characters in a file or folder name.

Certain characters should not be used in folder or file names, because computers use these characters to denote file locations.  For example, a slash (/) signifies a location within a folder.  In Windows, a colon (:) is used to identify a drive location, such as the computer's hard drive or an external storage device like a flash drive.  A period (.) precedes the file type in a file name.

UVACollab's Resources and File Drop tools may also allow you to enter special characters in folder names, but having certain characters, including colons, slashes, and periods, in a folder name may prevent site participants from downloading files contained in it via WebDAV.

Using the following characters in folder and file names will help ensure that your folders and files will work in Resources and File Drop:

The following characters are known to cause issues when they are used in folder or file names in Resources or File Drop:

Note: Some online journals post articles with their entire bibliographic entries in the file names. These names may contain special characters and be very long. If such a file is uploaded without editing its name, it can cause errors when uploading other files to the same folder.

Limit the use of spaces.

Tip: When you use a space in a file name, it actually takes up three characters in a file path. Each space in a URL is represented by %20. You can decrease the number of characters in your file path by using an underscore: _ instead of a space or eliminating spaces. Below is a table with an example of a file name and its length when spaces are replaced with underscores or eliminated.

Tip: Each file in Resources or File Drop has a name that displays for site participants when they view the file within the site, which is independent from the actual file name. A Display Name can be longer than a file name without increasing the length of the file path.

In Resources or File Drop, select Actions, then Edit Details. 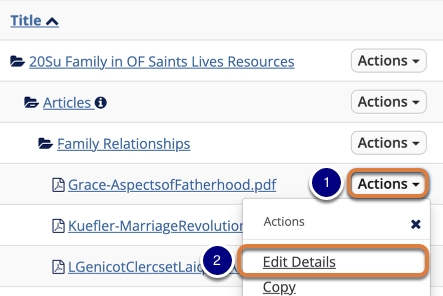 Note: On mobile devices or small screens, the Actions menu displays as a down arrow icon.

At the bottom of the page, select Update. 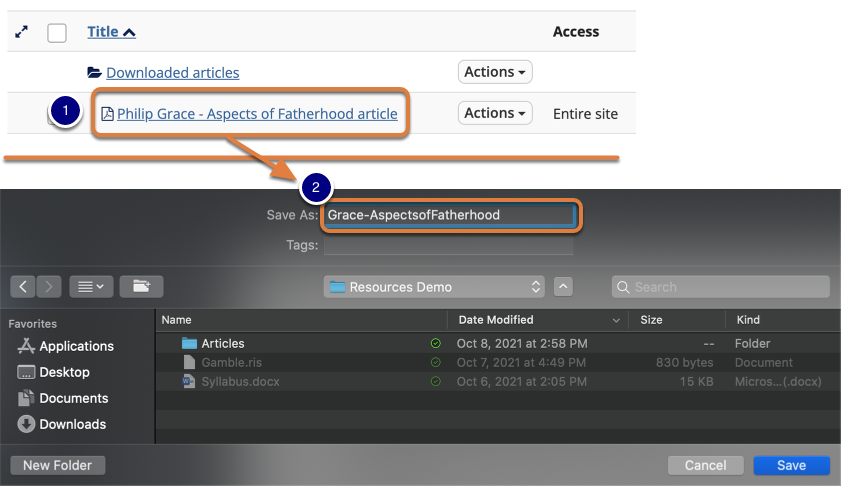